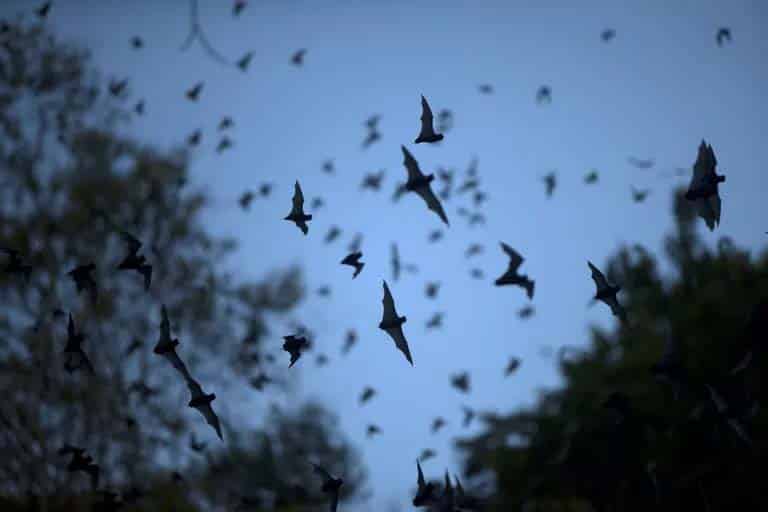 The Sounds That Bats Make

Bats communicate via echolocation. They can make calls via their larynx and vocal cords. It’s very similar to the process that allows humans to be. While the calls bats make can vary based on their species, the sounds that they make are typically referred to as clicks. If you slow these sounds down, the music they make will sound similar to the chirping noises a bird makes. You’ll also notice several distinct tones.

Not all bats use vocal cords when making calls. Some bats use their nostrils to make noises, while others click their tongues. It’s also possible for bats to make clicks with their wings. Intriguingly, there’s much debate about how bats make a sound in this way. Experts aren’t sure if the sound comes from the snapping of the bones in the wings, the wings hitting the body of the bat, or the wings slapping together.

The noises that bats make are at ultrasonic frequencies, which means humans can’t hear them. Human ears can hear noises ranging from 20 Hz to 20,000 Hz. The sounds bats make are generally two or even three times at high as the upper end of that range.

Ultrasonic noises can be advantageous to bats in several ways:

Ultrasonic noises have shorter wavelengths. This means they’re less likely to bend around objects and more likely to bounce straight back to the bat.

These sounds also take a smaller amount of energy to make.

The sounds dissipate quickly, allowing bats to distinguish between newly made sounds and the echos of older sounds.

Bats can heighten their understanding of their surroundings by combining all of these components. As an example, an element with a constant frequency can travel further, which makes it easier for bats to identify the location of a sound.

It’s more common to hear frequency-modulated components in bat calls, but this isn’t always the case.

Recording The Sounds Of A Bat

Even though human ears can’t listen to the sounds of a bat, these sounds can be recorded by bat detectors. Because these devices have specialized microphones, they can record ultrasonic sounds. The sound is then translated so that humans can hear it.

Bat detectors use a range of methods to record these noises:

Heterodyning: This process mixes the sound from a bat with another similar frequency. This produces a beat that can be heard by humans.

Bats can cause property damage and spread diseases, which means an infestation can cause significant problems. Bat guano can pollute a home. Their feces can cause histoplasmosis to grow, which can be dangerous. Bats can quickly destroy property as they fly. Bats are also a carrier for rabies. If you suspect that you have bats in your home, it’s best to put in a call to animal control right away. The experts at (company) will be able to deal with bats quickly and remove them in a safe way.