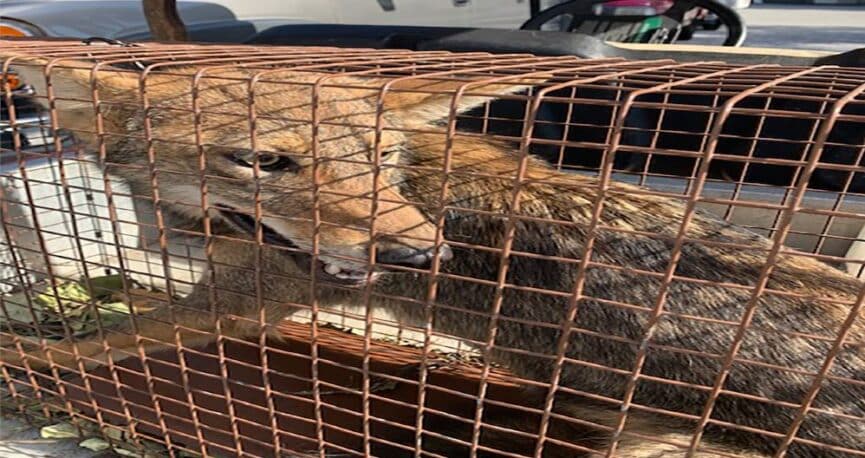 Why is Coyote Trapping & Removal Important?

Coyotes are a carnivorous wild canine that most resembles a domesticated dog. They are found throughout North America and have made sunny South Florida their home over the past few decades. Coyotes are larger than foxes but smaller than wolves. They are able to adapt to many environments, mostly because of humans encroaching on their habitats. They are common in grasslands, deserts, and sometimes even suburban environments. This can make coyotes a problem. Coyotes can also be dangerous to pets and humans as well.

Coyotes can weigh as much as thirty-five pounds and stand anywhere between eighteen to twenty-five inches tall; they can be confused for German Shepherds. But coyotes usually have snouts that are more narrow and bushier tails with black tips that may appear to be dragging on the ground. Coyote colors may vary from nearly all black to red or sometimes white, but they are predominantly gray and brown. However, it depends on the region that they are found. You can identify a coyote by their howl, which is a short, high pitched yip and long, drawn-out yowls.

Where do Coyotes Live in South Florida?

Coyotes can be found throughout Canada, Mexico, and the United States. They have expanded their range in recent years, filling the gaps left by the reduced wolf population. Coyotes can be seen in almost any climate and region of the country, this includes both suburban and urban areas, coyotes have even been spotted in the downtown areas of South Florida cities. Although they are not pack animals, coyotes travel in family units, especially so around their breeding seasons. The unit sizes depend on how available food or other resources are to sustain the group.

Will a Coyote Damage my Property?

Coyotes are notorious for invading properties, causing considerable damage to crops, pets, livestock, and even domestic pets are not safe. Coyote encounters are common for farmers, ranchers, and homeowners alike as coyotes invade human territory for food, shelter, and water. Although they are known to prefer avoiding people, coyotes are encouraged to encroach closer into urban areas for a quick meal, which could end up being your dog or cat.

Do Coyotes Attack People or Pets?

Domesticated animals like calves, chickens, sheep, and goats are easy prey for coyotes, and so are household pets like dogs, cats, or smaller critters. Coyotes will sometimes also kill more than they eat when hunting livestock or poultry.

Coyotes are known to carry both diseases and rabies, so they are required to be taken care of by professionals in coyote control and trapping in domestic areas. Coyotes can carry diseases such as rabies, Lyme disease, ring worms, Parvo Virus, and mange caused by mites. Lyme disease can be passed from the coyote due to the ticks living on their skin, and ringworm and other dog-specific diseases can pass to your dogs from the coyote.

Electric fences, fences with rolling top bars, or other deterrents are a good way for homeowners to exclude coyotes from their property, as coyotes are known to scale, dig under, or go through gaps in traditional fencing. You can also close off crawl spaces beneath your porch, deck, and shed to prevent a coyote from building a den and rearing young.

Guard animals may also work as a deterrent to coyotes, but be wary. A full-grown coyote can jump a fence as high as 6 feet in moments and attack or even kill your loyal companion before you notice a thing.

Contacting a Coyote control expert is the most efficient way to eliminate an aggressive coyote population. Wildlife Removal Services of Florida has the tools, expertise, and knowledge to assist with coyote control, removing them in a safe and humane fashion.