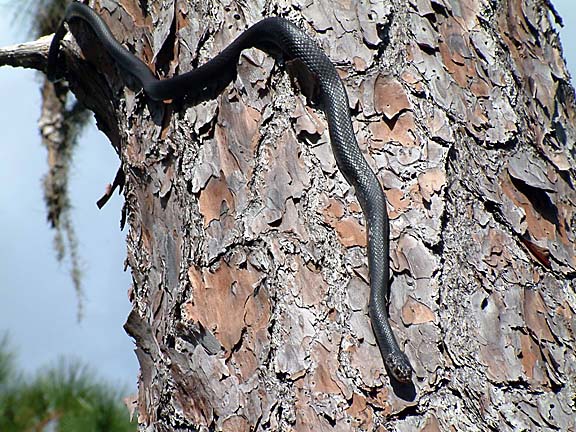 The Biology of a Black Racer Snake in Florida

The Coluber Constrictor Priapus, more commonly known as the Black Racer, is one of the more common types of nonvenomous snakes in the southern parts of the United States of America. A telling characteristic of the Black Racer is that they are very active during the day. Some ways to identify a Black Racer are by their black dorsal side, their grey bellies, and white him. They are also very fast snakes, due mostly to their active nature during the day.

Black Racers are a kind of snake that is considered color blind. These snakes can be as long as 55 inches as adults, with approximately 70 inches being their maximum. The Black Racer also sheds its skin once a year, less than the average snake who usually shed their skin twice to four times a year.

However, the scientific name for the Black Racer: “Constrictor” is mostly a misnomer. Black Racers portray very few of the behavior patterns of a constrictor, although they share some similar characteristics. A Black Racer does not coil around and constricts their prey, for example.

The Black Racer snake can be found mainly in the southern United States. They can also be known as the Blue Runner, Black Runner, or Blue Racer. The Black Racer tens to wooded areas such as forested areas, thickets, brushes, open fields, and gardens found around suburban homes. The Black Racer is capable of vibrating its tail in thick grass, creating a sound that is similar to that of a Rattlesnake’s rattle. It is because of this that Black Racers tend to hunt or rest in areas with tall grass.

Black Racers are often found in a ‘kink’ position in tall grass or wooden areas. This position makes it seem like the snake is a branch that fell from a tree. The Black Racer usually does this when it is sleeping or resting, or fending off predators if it has to.

The habits and behavior of a Black Racer snake are unique. It is excellent at swimming and climbing and can move at very high speeds, which is why it is known as a ‘racer’. Although they are not venomous, the Black Racer will often bite it’s prey when said prey is cornered. Typically, a Black Racer will run away rather than fight, but there are times when it will chase after it’s prey. It is because of this that Black Racer snakes are considered more domestic and violent compared to other snake breeds.

Humans are still the greatest threat to Black Racers as a species. A large majority of Black Racer’s are killed by moving vehicles. Black Racers are also deliberately killed out of fear of being attacked. It bears a similar resemblance to the Water Moccasin, a poisonous snake that shares locations with the Black Racer. Other threats to the Black Racer are predators like hawks and other large birds. These birds will spot the Black Racer from above and pounce on them before they can escape.

What do Black Racer Snakes Eat?

Black Racers are mostly carnivorous and consume animals that are smaller than they are. These animals include moles, insects, even smaller snakes, mice, and similar rodents, frogs, and little birds. The Black Racer will crush its victim into the ground and suffocate it rather than coil around and constrict before consuming the animal.

How to Get Rid of Black Racer Snakes?

Some people like to try store-bought snake traps on their own. I can tell you from over 20 years of experience the traps you buy from the store just are not effective. Some people like to use dangerous chemicals to remove snakes from their home or pool, but what most don’t realize is these chemicals can end up in the air that you breathe and water that you drink. Our team here at Wildlife Removal Services has been taking care of snake problems in Boca Raton and the rest of Palm Beach and Broward County for many years and have developed proprietary methods for removing snakes from your home or business without the need for any potentially harmful chemicals. Contact us today for immediate assistance with snakes or any other nuisance wildlife.