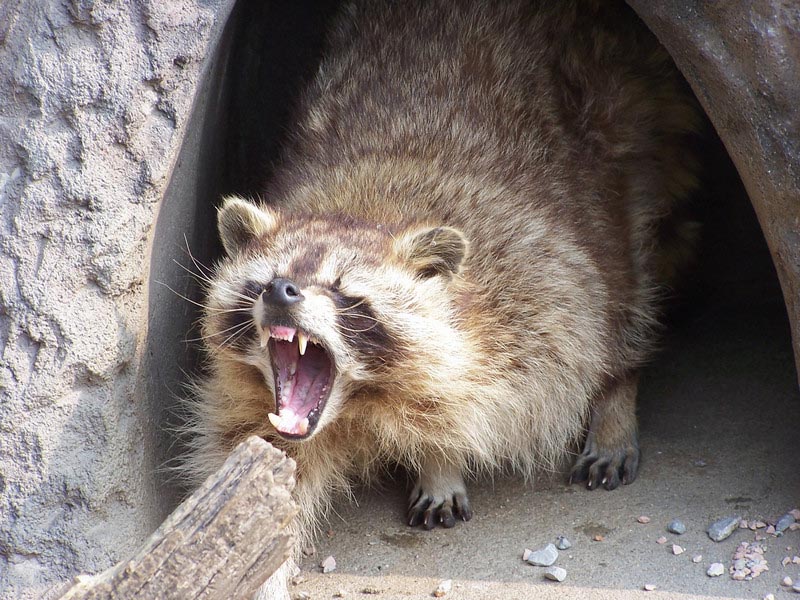 Raccoon Noises: What do they mean?

Raccoons make noises at night, and this is a proven fact. That is because of their nocturnal nature. Depending on the situation, raccoons make different noises. For example, when a raccoon is trying to communicate with other raccoons, it might whistle like an owl. They also growl in the presence of danger, when trying to defend itself. Other vocalization examples include screams, loud purr, and low grunt. Hearing these sounds is a clear indication of raccoon presence.

Raccoon noises may be confused with other animal vocalizations in the wild like an owl. As such, sound cannot be used to identify raccoons. Consulting a wildlife specialist is the wisest the pest that is in your residence or property. In urban settings, a raccoon may be found in homes like in the chimney, attic, porches (under decks), and roofs.

One of the most defining features of raccoon footpaths is their stride. When a raccoon is running or walking, their back footsteps are directly next to the front foot, but on the opposite side of their body. Of course, the distance between steps differs depending on the raccoon’s speed. Another distinguishing characteristic of a raccoon’s track shows its claws. The claws appear in their paws pads.

Even though raccoons have unique stride features, it may be challenging to differentiate them from other wildlife. In other words, this is something that needs detailed knowledge of claw shape, movement, and characteristics. In such a case, it would be wise to consult a specialist who will help you identify them quickly.

Raccoons are known for their distinctive fur colors. Its black-colored fur that runs across the face (around the eyes) appears like it is wearing a mask, and this is something that cartoonists like Disney Pictures portray. It indeed looks like a thieve in the night. Although raccoons are known to have a grey, black, and white furs, they may also have brown coats. For this reason, depending on color alone is not enough to identify the species, not unless you spot the black mask.

Adult raccoons measure between 18 to 28 inches in length. The tail contains a distinctive ringed color pattern. Their forefeet are sensitive and designed for climbing and holding objects.

If you suspect a raccoon is lurking around your property or home, then it would be wise to schedule a wildlife inspection. Wildlife Removal Services has a team of trained professionals skilled at not only identifying common species in your area but understand their characteristics.

Using their knowledge of noise, appearance, and stride identification, they will identify the potential intruder in your home and use the same expertise to remove it. These are the techniques they use to remove unwanted wildlife pests and raccoons from your property to get peace of mind.